The National Muslim War Memorial Trust is a charitable incorporated organisation (“CIO”). Accordingly its governing document is its constitution linked on this page.

All changes to the constitution require the approval of the Charity Commission. 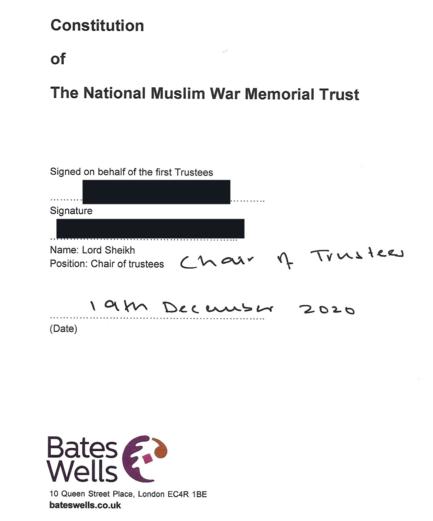 The most important clause in the constitution is the objects clause, which specifies NMWMT’s purpose. Our objects clause is reproduced below.

3.1 The objects of the CIO are for the public benefit:

3.1.1 the erection and maintenance of a public national war memorial to commemorate the services of Muslim personnel to Britain’s armed forces during the two World Wars and subsequent conflicts; and

3.1.2 to advance the education of the public, in particular but without limitation, in the contributions of Muslims to Britain’s armed forces in all aspects relating to their role, service and sacrifice during the two World Wars and subsequent conflicts.

You can download the full text of our constitution.