Lady Sheikh appointed as a Trustee

Following the sad death of Lord Sheikh, the four remaining Trustees have unanimously appointed Lady Sheikh as a Trustee.

As the manager of Lord Sheikh’s Parliamentary Office, Lady Sheikh has been involved with the Trust behind the scenes from the time that the first steps were taken towards its formation. She also has a wealth of political, diplomatic, and business connections, as well as being a Chartered Certified Accountant.

Below is Lady Sheikh’s biography.

Lady Sheikh was born in Nairobi, Kenya and came to the UK in 1967 as a teenager.

After completing her studies in London, she trained as a Chartered Certified Accountant before joining the BBC for seven years. After that, she worked for Yugotours rising to the position of Assistant Chief Accountant.

She was an adviser to Lord Sheikh in his work when he was the majority shareholder of the insurance brokerage Camberford Law plc (now Camberford Law Ltd), which employed over 200 people. She also ran and managed Lord Sheikh’s Parliamentary Office and staff.

She is passionate about the education and empowerment of women, helping orphans in poverty in the third world, promoting interfaith relations and environmental issues.

She is also a Trustee of the Sheikh Abdullah Foundation which she founded with Lord Sheikh. She is also Patron of the charity Orphans in Need and a Champion for Roko Cancer Charitable Trust. She is a member of the RSPCA, RSPB, National Trust and supports the Gorilla Organisation, wildlife charities and the WWF. Shortly after Lord Sheikh’s death, she was elected as a trustee of the National Muslim War Memorial Trust. 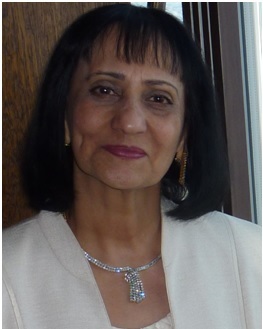